On 14th October 2020, an Investiture Ceremony was held to honour the newly appointed Student Council and house captains and to confer on them the responsibilities of their posts.

The ceremony was held in the School Assembly Hall which was specially decorated in blue and white, with shimmering silver drapes that hung from the ceiling. Special guests, Ms Emma Binding, Head of Mountview Primary International School, and parents of the soon to be honoured students, were invited.

The welcome remarks from Ms Martha and Ms Blessing signalled the commencement of this grand occasion. Thereafter, the audience arose to the singing of the National Anthem, followed by a special introduction of the special guest, Ms Emma Binding, who was then presented with flowers by two of the students, Maleeha Mia and Lily Josiya.

Next to hold the floor was a Year 13 student, Dalitso Kotokwa who shared with us an inspiring story about Alexander the Great and his leadership which references the leadership qualities needed in the school leaders. He encouraged everyone to not easily give up, as Alexander did not give up after failing 10 times. In addition, Alexander thought wisely about a solution and was able to succeed which is what he encouraged our leaders to do, to have qualities that will face any obstacle.

The ceremony then turned to its main objective; the Investiture of students. First up were the House Prefects, which were announced as follows: –Mulanje House – Mohamed Master and Safeena Safeer

They came up on stage to receive their assignments from Ms Emma and Mr Mishra amid cheers from the crowd.

Finally, the moment the audience was waiting for, the Student Council was announced. Amid cheers and smiles the following came up to receive their designations, which were: –

They received their designations followed by a round of applause from the audience. Ms Binding then led them in the reading of the oath.

Ms Emma then took the stage to share with the awardees and audience alike her vision of leadership, at the same time she mentioned how she is passing the leadership qualities to the new leaders. She talked about the realization of hard-work and how the newly elected leaders must be bold in decision making. She concluded by saying how honoured she was to be there, how our new norm in times of Corona Virus is working and reminded everyone that this was their year of greatness and opportunity to effect positive changes to the school.

After this, photos were taken, the National Anthem sung once more and the ceremony was completed with a vote of thanks by Ms Martha 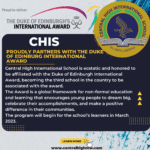 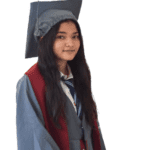